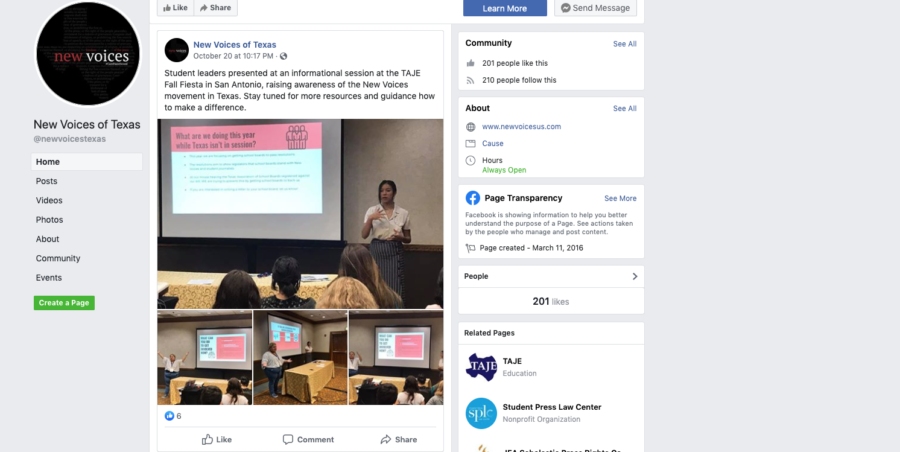 New Voices of Texas spreads awareness on their Facebook page.

New Voices of Texas fights for freedom of speech

Student journalists are pushing a new law in Texas to protect student publications.  The New Voices law will prevent administrative censorship and call for a new interpretation of freedom of speech.

“There is no way you can practice student journalism if you don’t have the legal protection to do so,” W. Charles High School’s newspaper adviser David Doerr said.

The New Voices bill has been adopted by 14 states, but was rejected by Texas at the past two senate session.

“One of the things that scares me the most, is the possibility that young people will get the idea that censorship is normal,” Doerr said.  “Censorship should not be normal in schools.”

A larger push for student journalist protection laws came after a successful adviser’s contract was not renewed in Prosper, Texas.  The school’s publication repeatedly faced censorship from a new principal, leading to the termination of their adviser.

“Some people think that they can print everything, and some other schools think they have to get everything cleared first,” Doerr said.  “There’s kind of a patchwork across the state, where there is not a consistency on what is allowed and what is not allowed.”

There is currently no law that can prevent principals or any other school administration from censoring student journalist.  This means that principals can and have censored any writing that is deemed not to be positive and elevating of the school’s character.

Doerr believes that all student journalist should sit down with their principal and build a trusting relationship when it comes to ethics.

“I don’t think that principals should be involved in the censoring process,” Doerr said.  “They hired teachers for that job.”