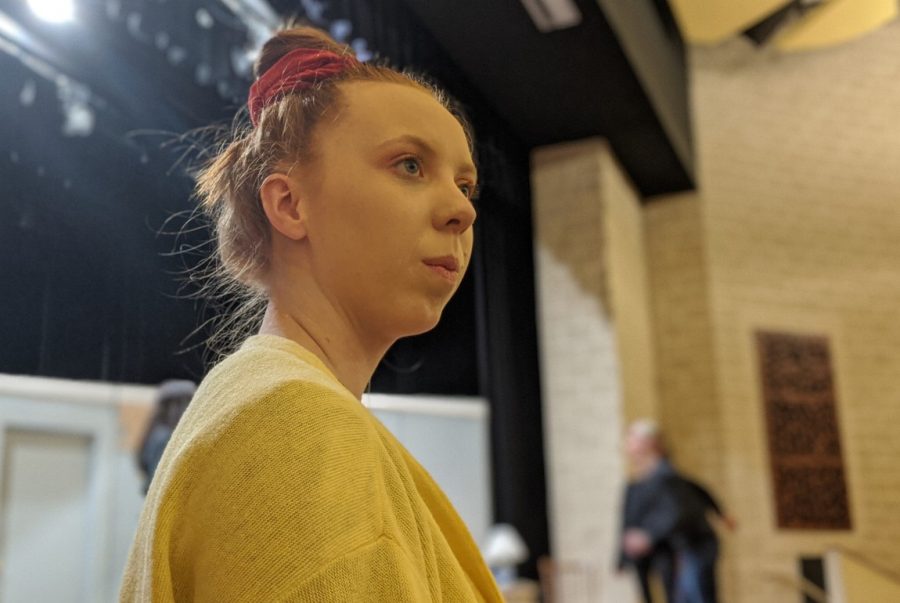 During rehearsal for 'Clybourne Park,' junior Brenna Collins plays Bev in the first part and Lindsey in the second part.

In one act, production theater’s “Clybourne Park” traces 50 years of societal change from utter intolerance to concealed tension between black and white people.

The cast and crew will perform “Clybourne Park” for the UIL One-Act Play contest, a statewide competition with both technical and acting awards.

“This is a story that spans 50 years and deals with racism,” technical director James Black said. “In the beginning of the play, the outright bigotry is openly displayed, while in the later part of the show, it is still there but downplayed so that no one has to wear the label.”

The characters in each act are different people but are played by the same actors.

“As serious as this play seems, it is a comedy,” theatre director Casey O’Bryant said. “It plays up this idea, especially in (the second part), when everybody’s offended about everything. And that’s the joke. It feels like it’s a badge of honor to be offended by something, and I just detest that.”

The show begins in Chicago in 1959, when a white couple moves out of their house after the death of their son. They soon learn from a neighbor that the house was sold to a black family. Fifty years later, in the second part, the roles are reversed when a white family moves into the same house, in what is now a predominantly black neighborhood.

“My biggest challenge with this production has been the struggle of transitioning a house from when it is a family home in 1959, pristine and well-maintained, to a nearly condemned structure in 2009,” Black said. “UIL rules limit us on what we can do, so it is a challenge to make the changes believable but still able to happen quickly.”

Black and O’Bryant hope future audiences of Clybourne Park will walk away with more of an open mind, and realize the work for equality is still necessary today.

“I’ve been looking forward to this show for a year,” O’Bryant said. “I just can’t wait to dig really deep into the mentality of each side of this play. I think we’ll all learn something.”