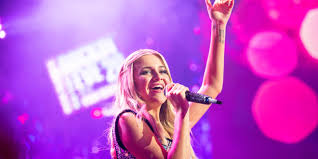 On Friday, country singer, Kelsea Ballerini released her third studio album. The record is labelled ‘’ Kelsea” and has a total of 13 songs. The tracks feature artists like Halsey and Kenny Chesney and have a great collaboration with her voice. The song with Halsey was easy to predict, they have been friends for a while and their voices match each other real well.  You hear passion and heart put in their singing of “The Other Girl.”

The song with country legend Kenny Chesney, Half of my Hometown”, is a great song. It is by far my favorite on the album and has a great feel that you get when you live in a small town.

The songs on the album are slow and easy listening. She has an amazing voice and really showcases it in this album.All in all, this new album is a great sequel to her previous and looks to have a lot of future hits to boost Ballerini’s career.