Football opens the season with a blowout win 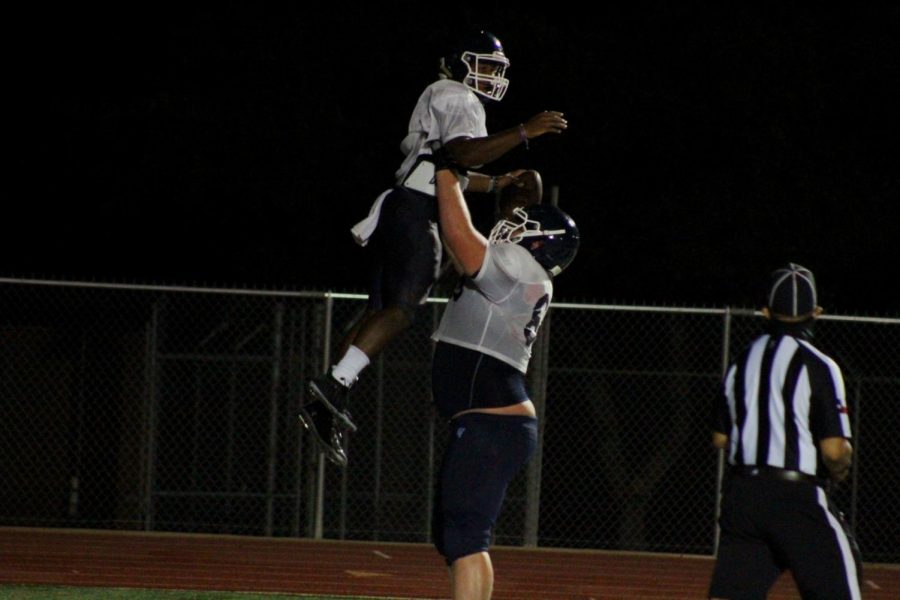 Jalen Nutt and Colton Thomasson celebrate a touchdown during football's preseason scrimmage. Nutt racked up 210 yard and two touchdowns on Friday en route to a 45-27 win over Harker Heights.

After months of waiting, football season opened with a bang on Friday, as the team slew the Harker Heights Knights 45-27 at Ranger Stadium.

The game began conspicuously enough. An opening drive that saw the Knights lose five net yards, followed by a short punt, gave the home team just 20 yards to gain to set up Austin Hosier’s 30-yard kick, his lone field goal attempt of the night (he made all six of his extra points).

The Knights punted again, and a drive-opening 25-yard screen pass to Garrett Brooks flipped the field for the Rangers, who scored their first touchdown of the year on a three-yard Jalen Nutt rush. Nutt, who switched to quarterback from cornerback over the offseason, completed 8/14 passes for 117 yards and a score and turned 16 carries into 106 yards and another score.

After Trey Moore recovered Malachi Lane’s (who impressed at the linebacker spot) forced fumble, the Rangers elected to go for it on 4th-and-11 on the Harker Heights 26-yard line, Nutt was sacked for a loss of 10 yards, and the Knights entered the second quarter down 10-0.

That changed quickly, though, as the visitors played spoiler to their foes’ shutout bid, tossing a 59-yard touchdown pass. Their kicker, it should be mentioned, wasn’t quite perfect (more on that later).

After Kyler Clarke’s 52-yard kick return put the Rangers in enemy territory, Gabe Hoskins marched the team down the field en route to an 11-yard touchdown rush, his first of the scores on the day. The Knights answered with a touchdown of their own, but it was then that their kicker made his lone blemish: allowing Trey Moore to block his kick. (Not that that is a rare occurrence whatsoever, but it still must feel demoralizing.) Moore forced a fumble on Harker Heights’ next drive, bringing his defensive tally to a forced fumble, a recovered fumble and a blocked extra point.

Hoskins’ quest to vulture touchdowns from Nutt continued, as he punched the ball in from the one the very next position. Harker Heights responded by throwing a deep, caution-to-the-wind interception to Blake Bowman. After a 10-plus minute referee moratorium, the teams headed into the second half for halftime, with the Rangers leading, 24-13.

Hoskins, Justin Avery and Zack McDonald picked up a touchdown apiece in the second half, and David De Hoyos snagged an interception late in the game. But make no mistake, the story of this game laid squarely on the shoulders of the running game. Six rushers combined for 238 yards and five touchdowns on the ground, which alone would rank among the higher-scoring games in recent memory. But the story wasn’t just the yards; it was how they got the yardage.

With Nutt at quarterback, more designed runs were to be expected. But the split backfields, frequent wide receiver screens and occasional reverses and RPOs were more surprising. Rarely did the team run any passing concepts resembling last season’s West Coast style. Rather, they focused on horizontally stretching the defense, then beating them over the top (as McDonald did) or up the middle (as Hoskins did).

Last year’s team utilized a lot of two-back sets, with Jacob Forton and Greg Eggleston serving as that offense’s pillars. Other players seldom earned touches. Friday, however, 10 players earned at least one touch, which was intentional on the part of coach Larry Hill.

“You know, there’ll be a lot of players sharing the ball this year, which we hope will make us that much tougher to defend,” he said before the game.

That spread-the-love philosophy worked in week one, but a road game with Madison is a different animal. It won’t be until next Friday, at the earliest, that fans learn how teams try to defend the designed run, RPO and trick-play-heavy offense that was implemented this offseason. For now, though, responsibly celebrating a victory is all anyone can do.

Team record with Jackson in the press box: 1-0