Football will play host to rival New Braunfels on Friday 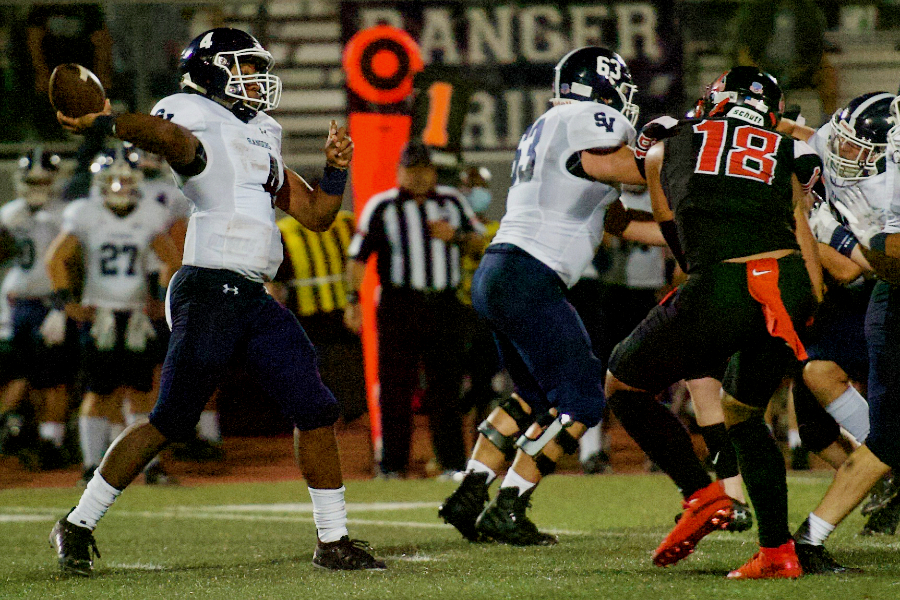 Jalen Nutt launches a pass against Wagner. Nutt will be key to winning Friday's rivalry matchup with New Braunfels.

After just one week, football finds themselves in a pivotal game against a longtime rival. Win, and the playoffs remain within arm’s reach. Lose, and they’ll have to win six straight, including beating three district powers.

But before considering those future opponents, the team must focus on the task at hand: hosting New Braunfels (0-1, 2-1), an unpredictable squad led by a talented backfield.

“Well, I think in this league you have to resist the notion of placing too much importance on one game,” said head coach Larry Hill. “‘Cause there’s just so many of them that are big, and being a seven-game race, you don’t ever really know which one is going to be the crucial one. So we have always tried to make the next game, the most important game.”

And yet, this game still stands as a critically important one. District 27-6A operates in tiers: the powerhouse tier (Judson, Clemens, Steele, although the latter is distinctly behind the others), the contender tier (Wagner, Smithson Valley, New Braunfels) and the sorry-you-got-stuck-in-this-district tier (East Central, South San). The top three remain unscathed through week one, but Wagner’s overtime win over the Rangers put them in pole position among the Contenders.

New Braunfels, meanwhile, followed up a solid preseason with a dud against Judson, losing 37-14 at home (and even those two scores came in garbage time). Electric quarterback-halfback duo Peyton Driggers and Ryker Purdy combined for just 90 total yards and a turnover, while the defense gave up 330 total yards to Judson quarterback Michael Burroughs, who was benched just a week earlier.

Still, the team has talent. Driggers is a Division I signal-caller who threw for 314 yards and four scores in his first two games, and Purdy is a week removed from a 265-yard, four-touchdown performance against San Marcos. Judson has a half-dozen Division I prospects on its roster; for any other team, slowing down the Unicorns’ offense is no easy task.

“They’re a different animal,” Hill said. “Everybody’s got a little different style of offensive attack that they bring to the table. And [Purdy] is a … beneficiary of their passing game, and the passing game is a beneficiary of having him. They do a nice job of taking what’s there.

“They throw the ball pretty well. [But] when you spread out with them, then [Purdy’s] got some big lanes to run in because [the] defense is spread a little thinner. To say, ‘let’s just take him away at all costs’ is one thing, and there’ll be times when we’ll try to do that. But I don’t think that can be our one and only strategy. We’ll have to mix our looks because they can, and will, spread the ball around the field. … It’ll be important to disguise our intentions pre-snap.”

Even if slowing down Purdy works, over-correcting and leaving Driggers to pick apart a wounded secondary isn’t a great alternative. But the run game is the priority.

“It’s hard to say [who’s more dangerous],” Hill said. “I think any time, at any level, you’ve got to stop the run. If you can’t stop the run, it’s hard to win at any level. [But] the quarterback’s good with his feet as well. So certainly we’re going to have to take away the run, but not at the expense of, ‘let’s just cram eight, nine guys in the box and see if they can throw the ball.’ They’ve proven they can do that. So, at times we’ll have to mix our looks, and at times be more pass-defense oriented.”

Despite the massive implications, Hill has drilled into his players that every game is equally important, even such a key rivalry game.

The Rangers’ toughest opponent this season hasn’t been another team – it’s the injuries. By the end of the Wagner game, eight starters and two reserves were sidelined (and a ninth starter hampered), including quarterback Jalen Nutt. But his backup, Jakob Cernohous, came in and played admirably, nearly completing multiple touchdown passes.

“Jalen … had an ankle situation,” Hill said. “He just couldn’t move. He could play, but he couldn’t be effective. So Jakob went in and did his job, as … several kids had to do. And we’ll need both of those guys playing quarterback to get where we want to go.”

So is a two-quarterback system in the works?

“I don’t think so,” Hill said. “You never know how the injuries are gonna go or game situations are going to go, but I don’t know that that’s really what we’re looking to do.”

The question was raised in popular discussion after starting cornerback Cooper Douglass broke his clavicle in the second half of Friday’s game. Nutt, a former (and future) standout cornerback, has excelled in two games and change. His contributions are vital to the team moving forward, whether that’s under center or (less likely) on the defense.

Andrew Montalvo will take Douglass’ spot in the secondary, with Lance Zuber becoming the primary boundary cornerback backup. Right tackle Braden Dornburg remains out, and Nick Freeman will continue starting in his stead. Long snapper Ryan Hakes will start at slot receiver. The classic “next-man-up” saying is a very present reality for this team, who has a number of other starters hampered by their own injuries. It took a while last Friday, but the second unit found their footing, won the second half by two touchdowns and scored in overtime.

This Friday’s game will feature two teams fighting for their playoff lives. It’s kill or be killed in district 27-6A, and when a team goes down, they do it fighting. That’s what Friday will be: a fight. And whoever wins this fight will come out the other side with just a moment to catch his breath, because the next one will be just around the corner.

The teams are set to face off Friday at 7:30 at Ranger Stadium, with limited capacity. The game will be streamed on Rangers Network.