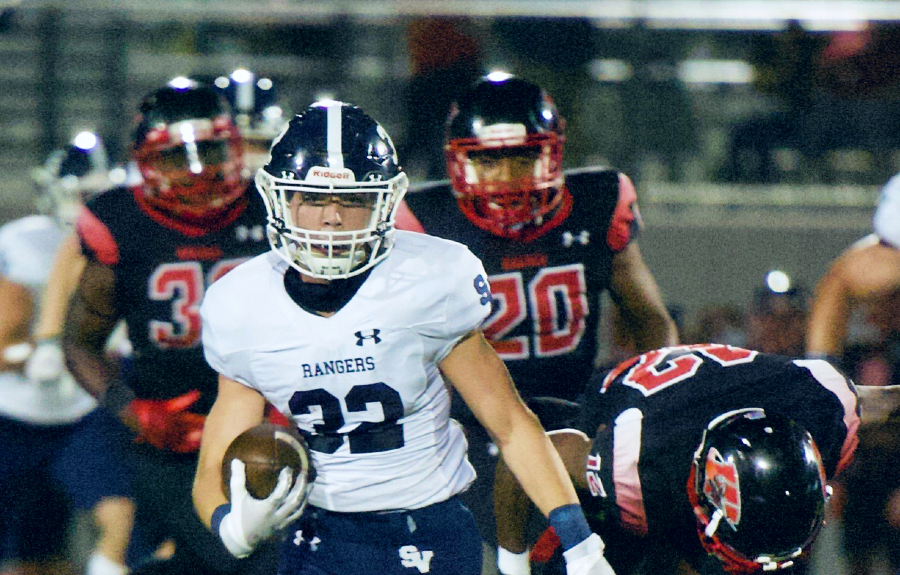 On the legs of senior quarterback Jalen Nutt and the backs of a swarming defense, the Rangers held the reigning district champions Clemens to only one touchdown 34-7 in a key District 27-6A battle.

Nutt, who scored four touchdowns against the Buffs, accredited the defense as well as his offensive line.

“Our defense was lit,” Nutt said. “They set the tone to get the game started. [The win] felt amazing. It wasn’t just me. I’m giving credit to the big boys blocking for me: (senior Nathan) Mooch (Moczygemba), (junior Britt) Stolle, (senior Ryan) Benca, (sophomore Colton) Thomasson and (senior Gerald) Vansickle.”

Clemens QB Max DiDomenico, the district’s offensive player of the year in 2019 , struggled to make significant progress, mostly because of pressure from the Ranger defense.  When it looked as though he finally had space to do some damage, he was overrun by defenders.

The Buffaloes’ troubles began with the opening kickoff. The indecisiveness of Clemens’ kick-returner Bryce Taylor resulted in a loose ball, picked up by Ranger sophomore David Dehoyos inside the 30-yard line.

Nutt & Co. did not hesitate to put immediate offensive pressure on Clemens’ defense, breaking right on the first snap and running up the line for a first down around the 13-yard line. Gabe Hoskins ran up the middle for a solid seven yards, and a quick receiver fake gave Nutt a touchdown to add to his rushing resume.

In the first quarter, DiDomenico made a swift sideline run and was tackled by a collar grab from junior Wyatt Hansen, resulting in a flag. After his first pass into the endzone was incomplete, DiDomenico faked the throw and ran the ball in himself, putting the score at 7-6 Clemens with two minutes left in the first quarter.

In six plays for about a 53-yard drive,  Nutt scored another rushing touchdown, breaking right around the Clemens defense. With the wind now at his back, Hosier’s extra point was good, 13-7 Rangers with seven minutes left in the first half.

Another scoring opportunity came when DiDomenico managed to escape the Rangers’ defensive pressure and float the ball to Andrew Edwards, who caught it just short of midfield. Edwards managed to get open moments later as DiDomenico found himself trapped in a labyrinth of the defense. Clemens attempted a 38-yard field goal, which fell short to end the first half.

Into the third quarter, Nutt launched a long ball down field to junior Dylan Domel, but the tight end did not secure the catch. Another punt by Wyatt Hayden put the ball back into the hands of the Buffs, but not for long as senior cornerback Noah Flores stepped in front, picking off the ball on Clemens’ 45 yard-line.

The Rangers were on the offensive and deep into enemy territory when Clemens’ senior Kehmani Evans went down with a probable right leg injury, an important loss for the Buffs’ defensive front.

For his third scoring play of the night, Nutt ran up the middle for a short rush touchdown, putting the Rangers up 20-7.

Running back A’mari Williams answered with an impressive 23-yard run up the middle of the field, gaining ground for Clemens.

With 40 seconds left in the third quarter, DiDomenico scrambled into the waiting arms of junior defender Malachi Lane. The ball loose, multiple Rangers attempted to scoop it up and score, but the Buffs fell on the ball and regained possession.

A short punt from Clemens resulted in excellent field position for the Rangers. Chase Senelick gained 11 yards and earned a first down, and Nutt kept the next ball to  break for the left corner, earning first and goal to start the fourth quarter.

With the ball, Nutt followed Hoskins into the endzone, scoring his fourth rushing touchdown of the game. The Rangers’ attempt at a two-point conversion was successful, with Nutt pitching right to Maverick Freeland. However, a flag was thrown, forcing Hosier to kick the extra point. The kick was good, putting the score 27-7 Rangers with under 12 minutes left in the game.

Junior Travis McCracken chipped in another touchdown with a 14-yard rush, putting the final score at 34-7.

The Rangers take on South San next week for its homecoming matchup.