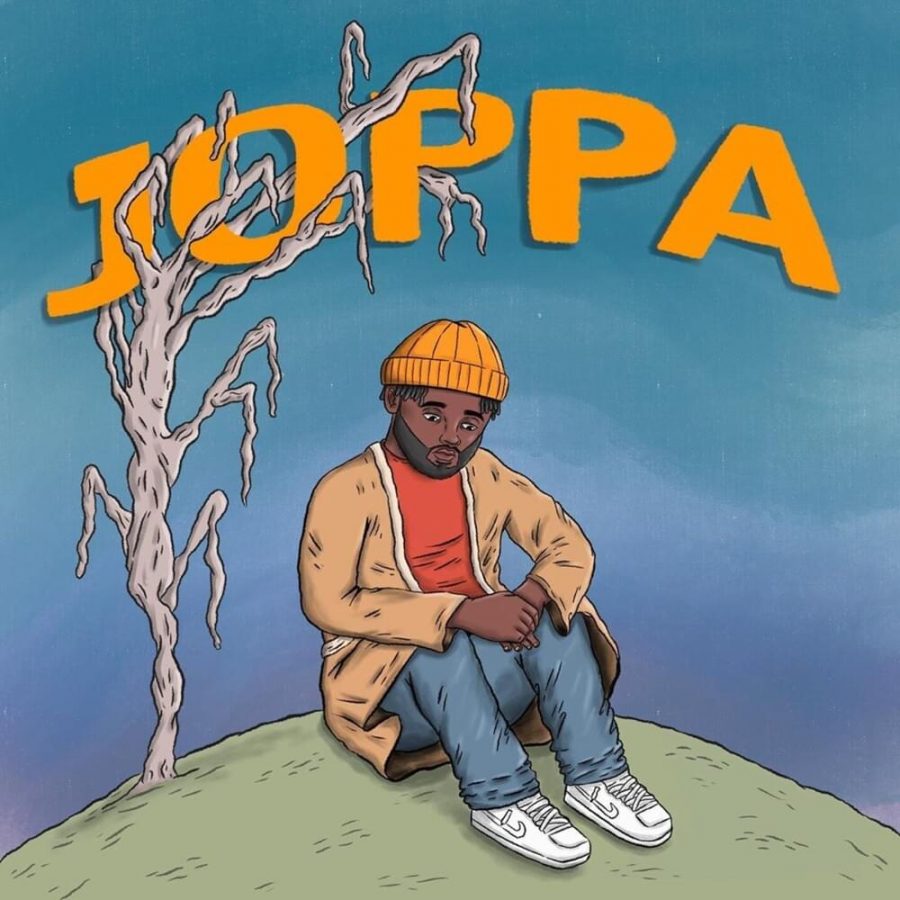 The cover to rapper Eshon Burgundy’s latest album, “Joppa.” In it, Burgundy takes a deep dive into his walk with the Lord.

Every so often, a song will pop up that causes its listeners to drop everything, including their jaws, and listen.

Eshon Burgundy made such a song with “Sinful Remission,” the fifth track on his latest album, “Joppa.” The album covers a wide range of topics, from racial justice (“I Felt That,” ft. Derek Minor) to end times (“Marks,” ft. Dwayne Fyah) to the pursuit of money (“Profitcy Freestyle”).

But “Sinful Remission” sticks with listeners throughout the second half of the album, just as Burgundy intended. Conventional wisdom says to place an album’s strongest songs first, last, and in the middle, and Burgundy sticks “Sinful Remission” with the rest of the meat on his 11-track LP.

The title of the album, “Joppa,” sets the tone for this song beautifully. In Jonah 1:1-3, God commands Jonah to go to Nineveh and preach to his enemies. But Jonah, in an act of rebellion, heads to the port at Joppa to sail to Tarshish – the opposite direction of Nineveh.

Burgundy’s journey, as portrayed in the album, mimics that of Jonah: God calling him in one direction, and him running in the other. The album is about that decision point, where God calls Burgundy to walk the path of righteousness and purity, while his flesh desires anything but.

We see this play out in the first verse. Eshon opens up the song with the line, “In a war with myself/Denying all my sin.” He goes on to paint a picture of the God he’s fighting for: one whose character is rooted in loyalty and forgiveness. Lines like “I’m lost/’Till the conviction begins to settle in/Off Godly wisdom/He know if He speak it then I’ma listen” display Burgundy’s internal struggle – he knows he should follow God’s word, but he can’t always decipher what it means on his own.

But this quest is not without sacrifice. When Burgundy sees “Half-dressed brown-skinned women,” he has to “deflect [his] eyes.” This is despite the fact that pop culture pushes “sex, money, and murder on the urban disenfranchised,” a demographic Burgundy empathizes with. He used to live in the projects of Philadelphia, but God blessed him with the opportunity to get out.

“God blessed from the south side of the projects/They saw potential for death, so they supplied techs,” Burgundy spits, referring to gang violence. And yet even though their initial thought was to grab a gun, God kept them safe, and “stretched” the time before they died. He closes the opening verse with a bar of triumph: “But what they didn’t expect was a divine flex/They thought our time was up/The Father made our time stretch.”

Burgundy repeats the hook, but it’s more meaningful this time: the audience knows that Burgundy needed that remission, because he would’ve never made it on his own. Similarly, the hook’s closing line (“I don’t want to die”) resonates more because the audience knows that an early death was, at one point, a very real possibility.

Burgundy enters the second verse with an air of cockiness, aimed towards the emotions the Lord has given him. “Nah I’m straight, I been doing good/I’m blessed beyond measure,” he spits before taking another look at his past. He exults in the change he’s seen in his life, particularly in his bedside decor: “My text (Bible), not the tech (gun) on my dresser.”

The second verse brings with it an added emphasis on wordplay. “I took my idol off my necklace/I was jaded,” he says, condemning out the over-portrayal of Jesus. But he won’t “disavow what is sacred,” as Satan wants him to – he loves Jesus, but hates what he sees as graven images.

He continues on to discuss how the world was created (“Before Yah formed creation, it was shapeless”), and how his current pursuit of God mimics that creation event. He doesn’t follow trends, just the foundation that God has set. His “lens got a shallow depth of field,” and once he’s “focused, the non-essentials get blurred out.” He presses through obstacles “like turnstiles.”

The second (and final) verse ends with Burgundy presenting himself as a weak man, while simultaneously calling out that same hypocrisy he felt, in others. He says: “I told my wife that she couldn’t leave/She said, “Why?” I said, “Because I didn’t cheat”/She said, “Oh really, well then, what about pornography?”/I said, “Dang, according to God that is the same thing.”

The bar is raw – who in their right mind would confess to a pornography-induced fight with their wife? – but for Burgundy, it’s bigger than that. No, he may not have had an extramarital affair with another woman, but he did entertain (and indulge) his sinful desires. As Jesus says in Matthew 5:28, “everyone who looks at a woman with lustful intent has already committed adultery with her in his heart.”

Burgundy’s overarching theme is clear: he is a broken man. But God has restored him, and forgiven his sins. “Sinful remission.” He may not be “as righteous as many think,” but the blood of Jesus has covered him. And now, he’s clean.

The song ends with one more repetition of the hook, but this time, it’s a little different. It has the same vocal base as before, but Burgundy’s raw voice now pierces through his hook, where his voice is more masked. It’s a small change, but one with big ramifications: Burgundy sounds free. Not locked into the consistent, enveloping flow of the first chunk of the song, he sings at the key he pleases, full of passion for his story – and, thus, his Author.

This stands in stark contrast to the ending of Jonah’s story. Both Burgundy and Jonah were at a point where they saw God’s compassion, and had to make a choice. The Biblical book of Jonah ends with God comparing Jonah’s passion for the little things He created, particularly a plant that God appointed to save Jonah’s life, with his hatred of fellow human beings. Jonah chose hate over love, and thus couldn’t find the freedom he sought.

Meanwhile, Burgundy’s affirmation that he’s “been blessed beyond measure” clearly displays a higher level of gratitude than Jonah ever showed. In fact, even the song title (“Sinful Remission”) is centered not on himself, but on God. He learned from Jonah’s mistakes, but the resulting emotion isn’t pride; it’s humility. He’s been blessed beyond measure, and there’s no better response he can think of than singing the praises of the one who saved him: Jesus.