Swim prepares for district as basketball and soccer continue their seasons 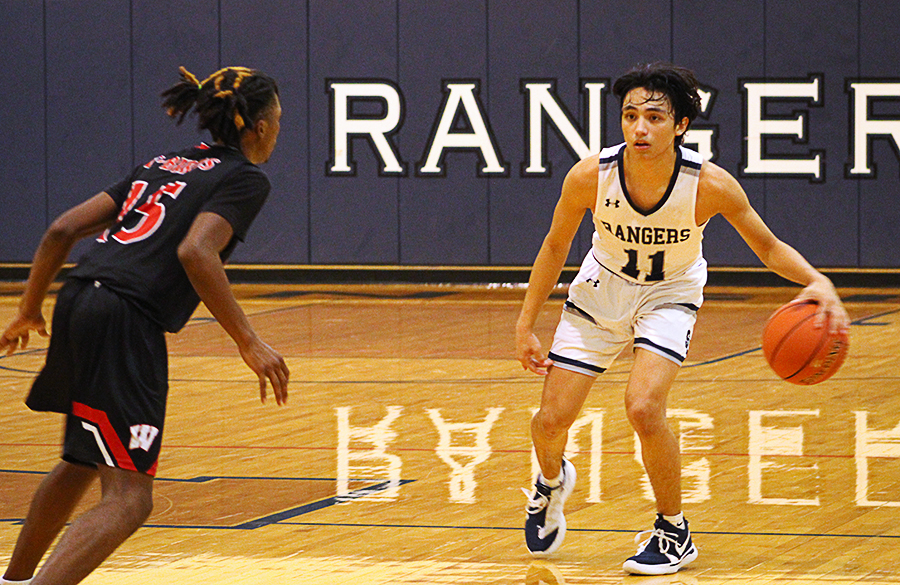 In a close game against Wagner, senior Tristan Ortiz takes on a Thunderbird in the 54-59 loss. Injured last season, Ortiz is second to Zayden High in points thus far, averaging 11.5 per game.

Boys basketball
Boys basketball lost to Wagner Friday, 59-54, despite Zayden High’s career-high 30 points. But on the second day of their back-to-back, the Rangers demolished Steele, 81-62, behind a career-high 26 points from Tevijion Williams and 20 more from High. The team currently sits tied for 5th in the district, but coming up is a gauntlet: at 2nd-place New Braunfels, vs. 2nd-place Clemens and at 1st-place Judson.
Girls basketball
Girls basketball lost to the New Braunfels Unicorns 54-38 on Tuesday. Gabby Elliot was the leading scorer with 11 points, with 2 blocks, and 4 assists. The loss dropped their record to 4-7 in district. Next they will play Clemens on Friday, who are currently 8-3 in district but are coming off a 61-31 loss to the Judson Rockets.
Girls soccer
Girls soccer began the district season with a 5-0 win against Wagner. Senior Jewel Mann had two finishes off crosses from Taylor Swenson and Sabrina Taber, Taber with a goal of her own. Helene Farris scored the fourth goal with a shot from the outside, and the final goal was scored by Emma Siebold assisted by Chloe Berry. The girls will face reigning district leader New Braunfels on Friday at home.
Boys soccer
Boys soccer also defeated the Wagner Thunderbirds last night, with a final score of 4-0. Two goals were scored by junior Alex Franz, and the others finished by senior captain Colton Adkins and his brother Jax. Their Friday game at New Braunfels has been postponed, and their next game will be against Clemens at home next Tuesday. Check out the boys’ season preview here.
Swim
Swim has district on Thursday, January 28, which is their third meet of the season, following a loss two months ago to Reagan. Over half of their season has been canceled due to COVID-19 concerns, and this will also be their first year with head coach David James. With both boys and girls having won five years in a row, the Rangers have a legacy to continue.