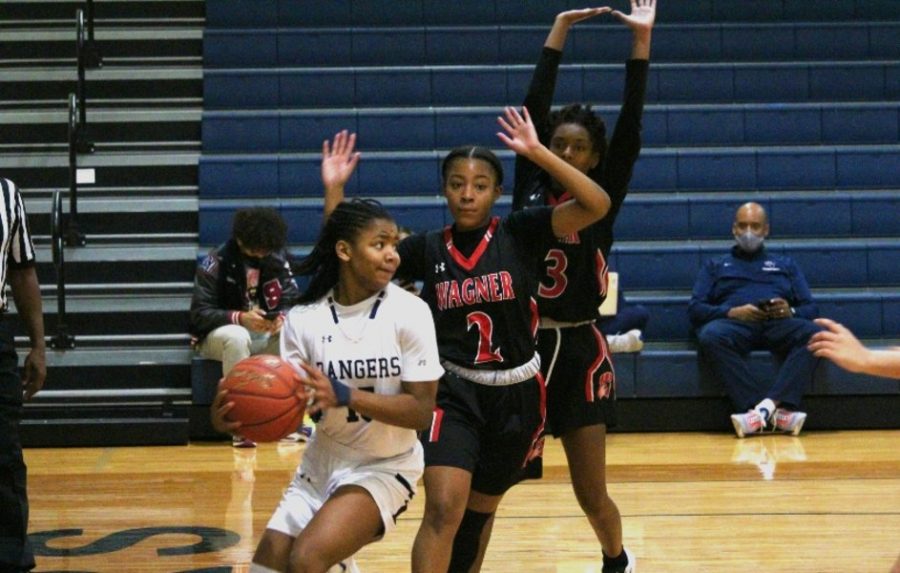 Trinity Garrett looks to pass the ball under pressure from Wagner. Garrett averaged 10 points per game this season, and she signed to play basketball at the University of South Alabama in the fall.

“It’s a little more difficult to have to break down a multitude of things, starting with press breaks, and offensive and defensive rotations,” Sutherland said.“I have to adapt as a coach and go back and try to break things down a little more clearly. We were very young and that lack of experience showed throughout our season.”

Because of the young roster, freshman and sophomore players stepped up to help their team.

“I thought our freshman came in, and not only that but some of our sophomores came in and did a great job,” Sutherland said. “I thought they displayed a lot of growth throughout the season. We really look forward to seeing them grow over the summer and come back ready for next year.”

Freshman Allison Howe was the fourth highest scorer on the team, averaging 4.6 points per game, and second to Gabby Elliot in defensive rebounds.

“Anytime you’re a freshman and you get put in positions that, almost thrown into the fire kind of sense, Allison obviously had her freshmen struggles,” Sutherland said. “But when she did have struggles, she always showed that resilience, most of the time in the same game to bounce back.”

Senior Trinity Garrett remained consistent across the board, scoring 10 points per game compared to last season’s 10.4, while sophomore Gabby Elliot remains as the team’s top scorer, averaging 14.6 points per game versus last year’s 13.2.

Garrett will continue her basketball career at the University of South Alabama, and Elliot will step up into a leadership position on the team as a senior.

“Gabby did an amazing job of growing as an individual player and then also growing as a leader for us,” Sutherland said. “She’s going to take a big role of being an extension of that coaching staff and helping her teammates to get better and holding them accountable. I think she’s going to have a great positive impact.”

Elliot led the team in rebounds, both offensive and defensive, as well as blocks.

“I think next year everybody can expect for her to have a really big year and people need to be prepared against her,” Sutherland said. “She’s going to be a force.”

Last season, the Rangers finished second in the district with a 11-3 record, but they finished seventh this year with a 4-10 record.

“We knew it was going to be a challenging year, unfortunately it didn’t quite finish the way we wanted,” Sutherland said. “We’re definitely going to have to make some team adjustments to find out what’s going to help us be successful offensively and defensively that’s going to put us in a position to win games.”

Unlike last year, most of the team will be returning next season, and the girls will  have another opportunity to accomplish their main goal; to compete in playoffs.