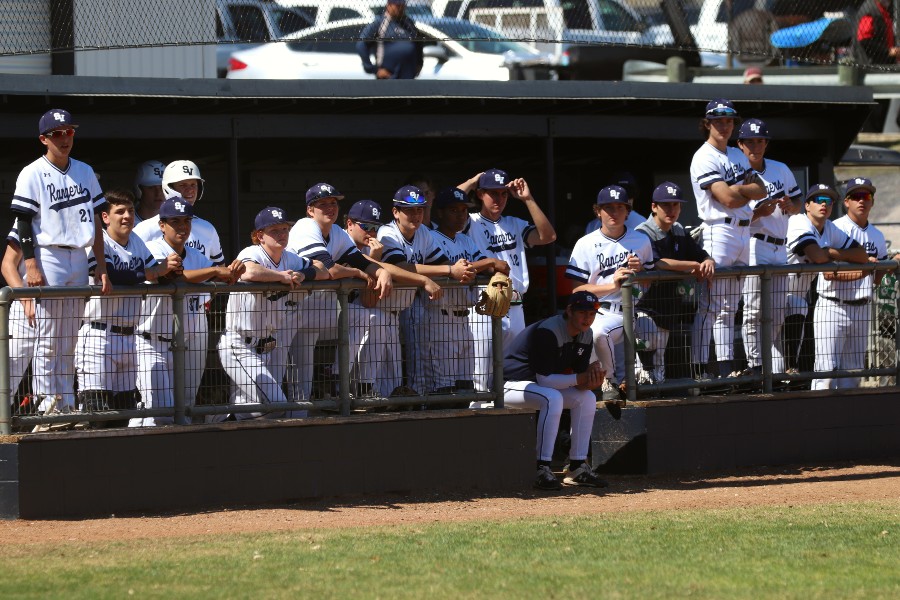 Standing in the dugout, baseball locks in before a game on March 6, 2020. One week later, these players – and others across the state – would lose their respective seasons to COVID-19.

On March 13, 2020,  Texans gathered around their televisions to watch Gov. Greg Abbott address the state. He promised increased testing capacity would be on the way and the STAAR test would be waived. Student-athletes breathed a collective sigh of relief; there was still hope.

Or at least, there was – until the UIL officially shut everything down two hours later.

All UIL Contests Suspended Due to COVID-19

“After the season got cancelled I was upset, but I knew that I couldn’t be mad for long,” senior track athlete Amalie Mills said. “I channeled my anger and started training hard to try to run fast in some time trials. I actually put up some fast times all by myself over the quarantine, which made me ecstatic about the upcoming cross country season.”

On April 17, the UIL announced the cancellation of all remaining 2019-2020 athletic activities and state championships, as well as the suspension of all practices, rehearsals and workouts. Soccer, baseball, softball and track seasons were left incomplete.

“We were just talking about our upcoming plans for the rest of the season,” said Trenton Hall, head cross country and distance track coach. “It was a really positive vibe, maybe a lot of athletes and relays advancing to the state meet. (But) then we didn’t see those guys again.”

The cancellation of the season initially left Mills’ recruiting up in the air, but the Air Force Academy saw potential in her, and she committed on Oct. 13.

“If I had a junior season, maybe I wouldn’t have chosen Air Force,” Mills said. “So, COVID allowed me to commit and sign to my dream school, and I couldn’t be happier.”

Girls soccer’s season was cancelled after a 4-0 win at San Marcos and just before a showdown with longtime rival New Braunfels. That season, the Rangers were fighting for playoff seeding; now, they sit in first place, with a chance to clinch the top spot against Steele on March 19.

“After being denied the rest of our season that we were so excited to play last year, I’ve learned to enjoy every moment I have of my senior year, because it’s almost gone,” senior forward Jewel Mann said. “Now I play every game like it’ll be my last, because that’s what happened last year. We were going through our district games like normal, and then – BOOM! – it was all taken away.”

Mann’s 38 points (14 goals, 10 assists) rank just behind sophomore Sabrina Taber for the team lead. Heading into the playoffs, the senior is ready to see her team’s hard work pay off on the pitch.

“Being able to play these playoff games will be my last memories of soccer,” Mann said. “I hope to make it the best experience [possible] and go to state.”

Speaking of state, baseball’s sights were firmly set on the state championships in Round Rock, and those expectations were well within reason. With nine players committed to play at the next level, and four committing since, the team racked up an 11-3 record in preseason tournaments. The future looked bright – until it didn’t.

“We were playing a game, and we were all joking around, like, ‘ah, this Corona thing sucks, we have to play Clemens three weeks from now,’” said then-senior Jarek Wells, who now pitches and hits at Midland College. “Then it got pushed back again, and then slowly you started to realize that as the news was going off, and all these things were going off, we’re not gonna get to play.”

On March 2 of this year, Abbott announced that he would lift the statewide mask mandate effective March 10, slightly less than a year after Texas’ initial COVID-19 lockdowns. After that, Comal ISD changed its mask policy to make face coverings optional on campuses effective the same day – a decision that has drawn scrutiny from parents, students and teachers.

But despite the rollback of the mask mandate, coaches encouragee their athletes to continue wearing masks, in an effort to preserve their seasons.

“We are still encouraging masks to be worn just as they were prior to ending the mask mandate,” head baseball coach Chad Koehl said. “Our guys understand the importance behind keeping everyone on the field and not having anyone quarantined. They do not want to lose another season like we lost last year.”

The same goes for the track team.

“Even though masks have become optional, all the quarantine rules still apply,” Hall said. “We don’t want them to lose out on a valuable part of their spring semester.”

Saturday marks one year since the UIL’s initial shutdown announcement, and spring athletes hope to pick up right where they left off. The initial Covid shutdown taught the world to savor the present and live in the moment; it’ll be that mindset that leads players through the state’s one-year anniversary and beyond.

“Last year I definitely took our preseason for granted, with a sort of ‘warm up for district’ mentality,” senior pitcher Brandon Taylor said. “After our season was cut short, I had to learn to play (every game])as if it was the last game I’d ever play. So this year, I (will) go out and try to play to the best of my ability, with the mentality of, ‘this could be my last time playing for SV.’”

“What I’ve learned is that we can take anything for granted,” senior third baseman John Garza said. “My teammates and I have (been) going at it every day as if it was our last day on the field.”