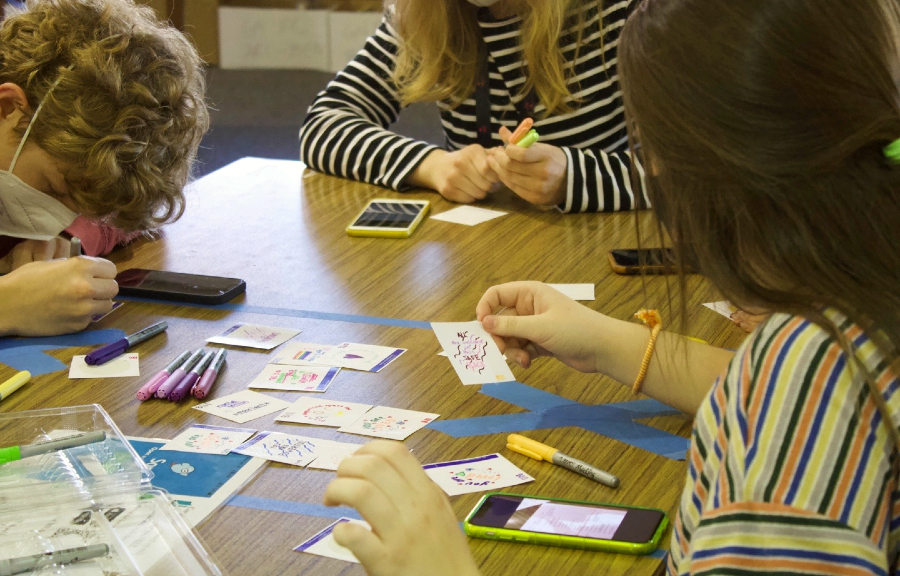 Sophomores Mason Mock and Ainsley Miliken decorate stickers to put outside of classrooms. On the stickers, students wrote phrases such as "This is a safe space" or "Your mental health matters".

A female student wearing a form-fitting shirt struggles to ignore the stares from her male classmates as she walks to class. An openly gay student suffers from bullying and hateful messages for being themself.

The students and staff of Smithson Valley are utilizing controversial topics and movements to educate those who are not aware of the issues that minority students face.

Students United for Respect and Equity, or the S.U.R.E Club, works to give students a safe space to voice their opinions and end discrimination on campus.

“Only through education and collective action can we change the culture,” sponsor Jimmy Wilson said. “Many students may not feel seen or feel the experiences of students different from them, so it’s important to help educate others and stand up and call out discrimination when we see it.”

Wilson, along with fellow English teacher Rodolfo Preciado, are leading the club as this year’s sponsors.

“During classes, marginalized students don’t always feel safe enough to discuss the issues that are intriguing them,” Preciado said.

“Being a part of S.U.R.E Club means standing up for the things that are right while also giving a platform to oppressed communities,” disability chair Elle Suermann said. “For me specifically, it means that I can provide more awareness for severe autism.”

Suermann, along with co-chair Ainsley Miliken, are working to end disrespect against targeted groups on campus.

“Slurs run rampant and casual jokes are just hurtful,” Suermann said. “I just want people to be aware of the power words have on other people.”

Suermann and the rest of the committee are currently planning their fundraiser: selling cookie dough and butter braids to raise money for the special education department.

S.U.R.E Club’s president, Addison Lueck, became a leader of the club to promote the equal treatment of people from all cultures and backgrounds.

“I didn’t understand why people treated people differently than they would treat themselves,” Lueck said. “So it didn’t make sense to me when I would see people putting others down or bullying each other for things that they couldn’t control or things that made people who they are.”

As political and social environments change outside of school, the culture of Smithson Valley is altered with it. The S.U.R.E Club is always accepting new members who hope to educate students and create a safe and diverse learning environment.