The end is Knight 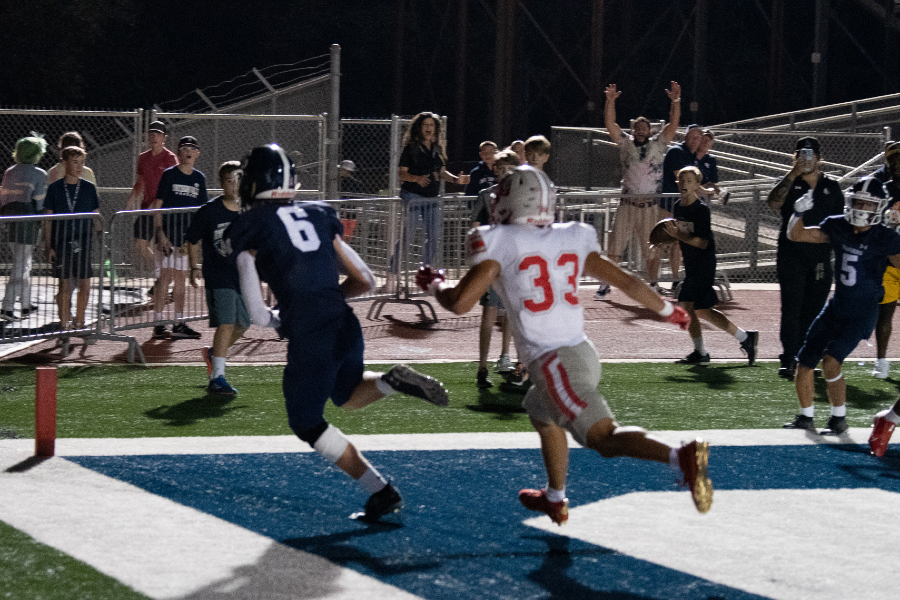 Zack McDonald speeds through the end zone for a touchdown against Judson. McDonald caught four passes for 95 yards in Friday's loss to Steele.

Football lost to Steele on Friday, 20-6, in a defensive slugfest of a district title game. The Knights held the Rangers out of the end zone for the first time this season; in fact, it was their first time to score fewer than three touchdowns in a game.

The Rangers fell to 8-2 with the loss, while Steele earned a spot in school record books by improving to 10-0. Both teams will hold the top seed in their respective playoff brackets.

The Rangers burned over six minutes off the clock on the game’s opening possession, converting a fourth down en route to a 79-yard drive into Steele territory. But the drive stalled out near the end zone, leaving them to kick a short field goal and take a shallow lead.

The Knights attempted a fourth down conversion of their own on the Smithson Valley 29-yard line, but Teshaun Singleton had to fall on a fumbled exchange for a loss of a yard. The defense avenged their teammates, however, holding the Rangers to an incompletion on fourth-and-4 on the Steele 13-yard line.

Singleton led the Knights’ offense down the field, running for explosive plays of 32 and 16 yards on the way to Smithson Valley’s red zone for the first time. On fourth-and-5 from deep in Ranger territory, quarterback Connor Vincent scrambled towards and up the right sideline before hitting Levi Dashnea upfield for a first down. On the next play, Singleton burst up the middle for a 9-yard score. A poor snap exchange allowed the Rangers to block the extra point, leaving the score at 6-3.

Singleton nearly scored an 81-yard touchdown on the Knights’ next possession, but Garrison Eggleston took long angle on the play and managed to catch up. That didn’t stop the offense though – three plays later, Alvin Williamson high-pointed a pass on the left side of the end zone to extend the lead. This extra point sailed true, making the score 13-3.

With just over a minute to play in the half, the Rangers sized the opportunity of a short field afforded by a pooch kick. Mata hit Zack McDonald deep for 46 yards, and three plays later, Clayton Amaya chipped in another short field goal.

A sleepy third quarter saw the Knights punt twice from inside the Rangers’ 35-yard line. And that scoreless streak continued into the fourth frame, as the Rangers – trailing 13-6 – punted twice in the final five minutes of the game. The contest’s final score came as the Knights attempted to run the clock out; With 1:30 remaining, Singleton broke free up the middle and sprinted 78 yards upfield for his second touchdown of the night. That run was the dagger.

Because Madison defeated Macarthur on Friday, the Rangers will host the Mavericks in the first round. That game will be a rematch of a preseason bout which the Rangers won, 28-0.