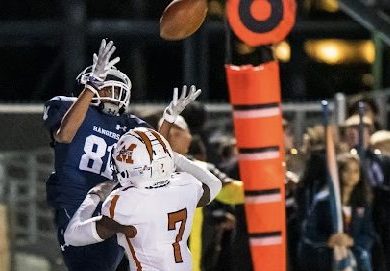 Junior T.J. Hunt receives the ball for a touchdown in the Ranger's bi-district game against Madison.

Coming off a loss from last week’s district title game against Steele, football defeated Madison 35-25 in the first round of playoffs Friday.

Madison came out with gusto, letting the Rangers gain a mere two yards on their first drive. After blocking the punt, the Mavericks scored a field goal with 5:51 left in the first quarter.

The Rangers turned the ball over after their second drive, giving Madison room to score on its third drive. Nevon Cooper caught a 53-yard pass in the end zone, making the score 10-0 for the Mavericks (1:22).

After a slow start, the Rangers went 37 yards on their third drive, with rushing-leader Travis McCracken scoring a 4-yard rush to put the score at Rangers 7, Mavericks 10 with 11:17 left in the first half.

Derek Mata had two near-interceptions on the Rangers’ fourth drive, leading to another turnover. Sophomore Jackson Duffy bailed the Rangers out with an interception in the Maverick’s end zone (6:10).

The Rangers stormed down the field with Douglas Lantz rushing a total of 36 yards and Kyler Clarke with 12. Mata threw a 24-yard pass to junior TJ Hunt, and with a good PAT from Clayton Amaya, the Rangers were up 14 to Madison’s 10 to finish the first half.

Though the third quarter started off slow, Tanner Donavon changed the pace with an interception and 41-yard return (5:31). Brayden Bafidis finished the drive with a 16-yard touchdown.

With 2:52 left in the third quarter, junior defensive end Gavin Woods set the school sack record with 17. The previous record was set by Jay Young in 2003.

McCracken began the fourth quarter with an 11-yard touchdown carry (11:56). Madison followed with a rushing touchdown from QB Caden Mata despite heavy pressure from Camden Egli and Kolton Scheppler. That put the score at Rangers 28, Madison 17 (9:05).

With five minutes left in the game, Lantz picked up a few yards, putting the Rangers at their own 25 yard line. After a holding call on Colton Thomasson and a false start from Britt Stolle, the Rangers were pushed back to the 10 and forced to give back the ball.

Madison’s Mata made a touchdown pass to Darius Dillard, along with a good two-point conversion. After a 47-yard carry from Bafidis, McCracken rushesd for three yards for a touchdown (1:29) Rangers 35, Mavericks 25.

With tonight’s win, the Rangers will play Austin Bowie (9-2 overall, 5-2 in district) on Nov. 19 in the regional quarterfinals.