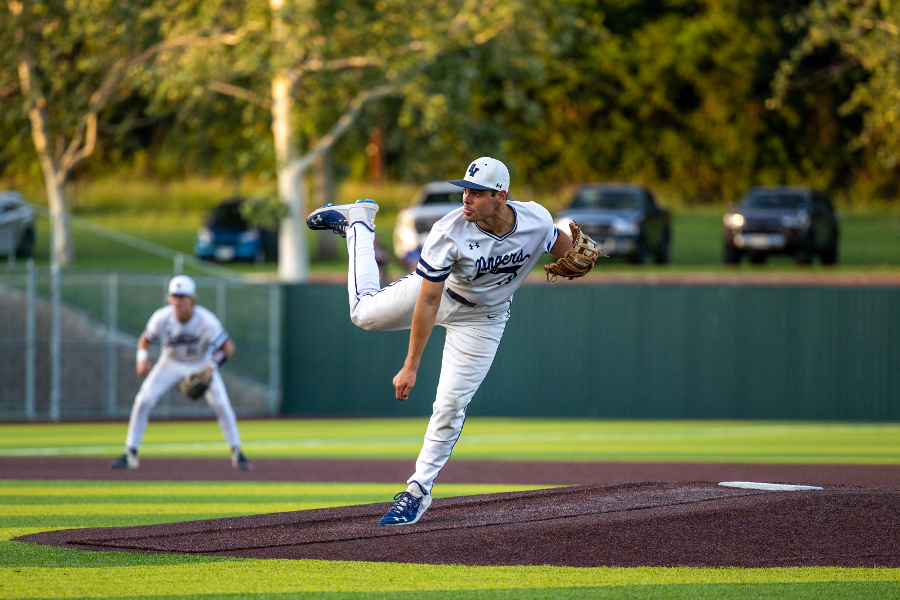 Tim Arguello hurls a pitch in a playoff game against Austin Westlake. On Thursday, Arguello started the Rangers' Game 1 loss to Reagan, striking out four batters and allowed no earned runs.

In a rivalry so often characterized by intense vitriol, it’s difficult to imagine Smithson Valley and Reagan fans coming together on anything. But on Thursday night, that’s exactly what happened.

For much of this season, the Rangers have embraced the mantra “Play for Cody,” in honor of a former Ranger baseball player named Cody Fuller who was diagnosed with stage IV pancreatic cancer in March. Tragically, Fuller passed away earlier this week at the age of 39.

Fuller’s passing sent shock waves throughout the Smithson Valley community, many of whom were personally impacted by him. In his honor, the Rangers donned warmup uniforms with No. 25 printed on the back, and Ranger fans wore white. In solidarity, the Rattlers and their fans did the same.

A pitcher’s duel, the game went down to the wire, but Reagan pitcher Aiden Coleman ultimately earned the win after striking out five and allowing just three hits in the Rattlers’ 2-1 victory.

Tensions were high heading into the first inning, which played in the Rangers’ favor. Backdropped by deafening student section chants, Coleman walked consecutive batters on nine total pitches, prompting a mound visit just a third of an inning into the game. As the next hitter – catcher Ethan Gonzalez – strolled to the plate, the Reagan student section further ramped up their heckling. He responded by hitting an RBI line drive to shallow center field, giving the Rangers their first (and only) lead of the game.

After that, though, the bats cooled off a little. Neither team sent more than three batters to the plate in an inning again until the bottom of the third inning, when Reagan made a play at scoring their first run of the game. With two outs, they managed to put two runners in scoring position for Teagan Peeples, a Texas A&M-Kingsville commit. But Ranger starter Tim Arguello killed that attempt, striking out Peeples swinging on six pitches.

The Rangers put themselves in the driver’s seat for a second score early in the fourth inning, courtesy of a leadoff triple from Gonzalez. But his courtesy runner, Jackson Duffey, was stranded there after Coleman put the next three batters down in order. And in the bottom of that same inning, their foes struck.

Cole Tabor opened the inning with a would-be pop-out to the left side of the infield, but a miscommunication between three Ranger fielders allowed him to safely reach first base. Arguello sat down the ensuing two batters – on a swinging strikeout and a flout to center field, respectively – and then the real work began. Tabor took second on a wild pitch, and he was quickly joined on the base paths by Sasser and Coleman, who walked on a combined nine pitches.

With two outs and loaded bases, Tabor scored (and King reached base safely) on an error by first baseman Jackson Elizondo. With one run on the board, Beaird walked on five pitches, initiating what would prove to be the final scoring play of the game. Three men remained on base, but Elizondo made a diving catch on a line drive to strand them there.

“You gotta look past that,” Arguello said of dealing with busy base paths. “You gotta keep having good at-bats. You gotta fight. Stuff like that. It’s just a part of baseball, you just gotta deal with it and move past it.”

It’s the second series in a row the Rangers have trailed after losing Game 1 by a single run; last week, they came back to beat Westlake in three games.

“Just, one game at a time,” Arguello said. “Worrying about two games is twice as much as worrying about one. So, why do that? You just gotta win one and then you gotta win the next, that’s all it is.”

“It’s a baseball game, it’s a kids’ game, you gotta treat it like a kids’ game,” Arguello said. “It’s the same game everybody out here’s been playing since we could walk, since we could talk. This is the same game we’ve been playing. And it doesn’t always have to go our way, that’s why we play it serious. We got more games ahead of us, and we gotta focus on those and win.”