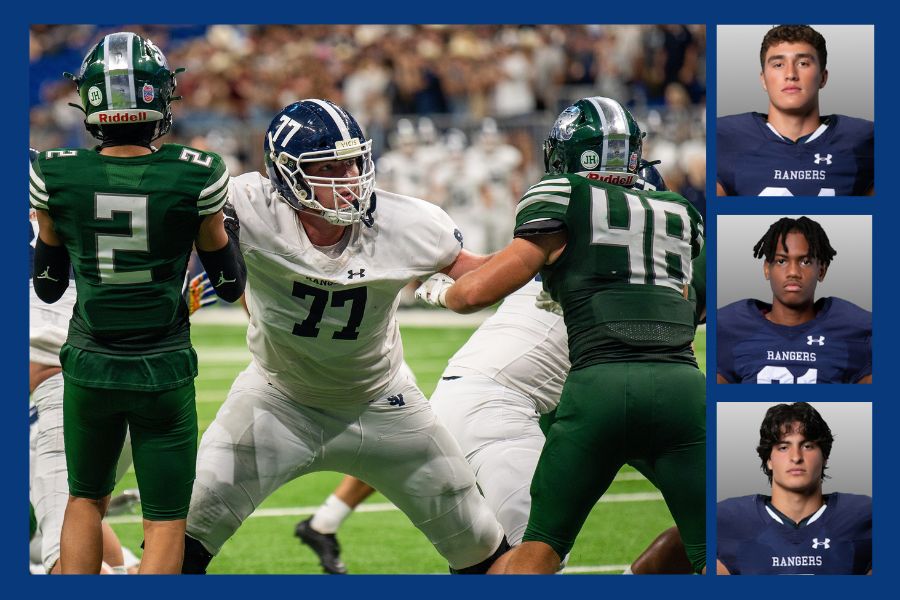 On Jan. 7, Colton Thomasson will play in the All-American Bowl and teammates Gavin Woods, T.J. Hunt, and David Dehoyos will play in the San Antonio area All-Star game. (Photo by Zane Klein)

Top of their game

Colton Thomasson learned he had achieved one of his personal goals through a twitter DM.

The All-American Bowl invitation came through an inauspicious delivery on Oct. 13, but it did inform the Texas A&M commit he was invited to play at the 2023 All-American Bowl, featuring the best 100 high school players in the nation. The game will be Jan. 7 on NBC.

“I was in awe,” Thomasson said. “It was one of my major goals going into high school to become an All American Bowl player, so it was really awesome to see that happen.”

Thomasson was not the only football player who received accolades for prowess on the field – three teammates were named to the San Antonio Sports All-Star Game Jan. 7. The game will be aired on The CW35 and San Antonio Sports Star ESPN 94.1 FM/1250 AM radio.

“I found out around last week from my coaches,” Dehoyos said. “It’s a milestone, it’s something big, it lets me know that I’m doing good, that I’m progressing.”

Dehoyos, who plays safety and running back, has had three interceptions, two touchdowns, 45 total tackles, one fumble recovery, one blocked field goal and 144 yards rushing.

Because of his play at the Alamodome game against Reagan Aug. 27, he was named the Jon Wayne Player Of The Game. Dehoyos is also a Texas Tech Baseball commit.

Wide receiver and cornerback, T.J Hunt has nine touchdowns and 29 receptions, and 691 yards rushing this season.

“It means that my hard work paid off, that the coaches trusted me and believed in me enough to nominate me to get picked,” Hunt said.

Gavin Woods has had 65 tackles, two sacks, and one interception. He also holds the school’s sack record of 17 sacks total.

“Just the fact that I am able to represent my team and this community is just really cool in itself,” Woods said.

As opportunities arise, so does the excitement.

“Now we just have to go win state with the Rangers,” Thomasson said,  “and that’s something we’re all going to accomplish together.”