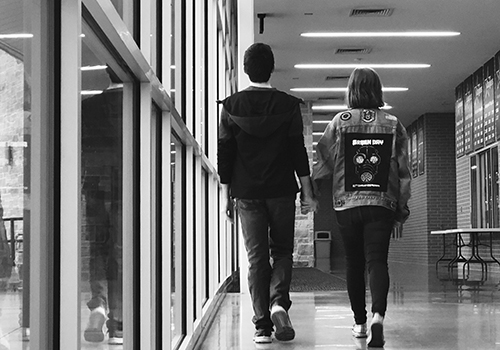 Students often walk the hallways hand in hand as a public display of affection. More intense displays such as kissing face criticism. “Hugging is okay, but making out is just weird,” sophomore Aubri Bain said.

The unmistakable presence of couples materializes in every space imaginable: lined up against the walls of A,B,C and D wings, upstairs or downstairs; at A, B, and C lunches; nestled in tight nooks and crannies; before, during, and after school. In between passing periods, partners attempt to take advantage of the mere six minutes and share smoldering or casual affections. Throughout this limited time, watchful students, teachers, and administrators observe. Feelings of discomfort, acceptance or neutrality take root inside these spectators, along with motives to interfere or simply ignore those intimate interactions.

PDA is no secret to the community at this campus, or to any public school for that matter. However, the question on what is firmly considered accepted or wrong remains each school year.

“[PDA] is not a priority [at SVHS],” assistant principal Sally Bratton said. “Things like graduation and getting kids ready for that and college are.”

While one group of observers feel uncomfortable when PDA occurs, the other half expresses indifferent feelings, and even partake in a public affection themselves.

“In moderation, I do some PDA,” freshman Taylor Gamble said. “It’s just a way to show affection. Holding hands is fine. I try to refrain from making out in front of everyone though.”

Not all students are caught in the act of PDA among people. Major cases have been known to arise behind the scenes.

“Stuff on camera [is captured] out of school [as well],” Bratton said, “[when] there aren’t 2,000-plus students walking around.”

Teachers who patrol the hallways of their classrooms are prone to regularly witnessing and forming their own opinions over PDA.

“I see it about five or six times a day,” English teacher Holly Leach said. “Hugging and snuggling and stuff, that’s just affection; it isn’t against against protocol. Snogging: off-limits. It’s weird to see that in a crowded hallway. People don’t do that unless they want to be seen. I just don’t understand it.”

Amid other possible issues involved with a school year, the topic of PDA represents a small speck of importance compared to other concerns in school.

“Does PDA make people uncomfortable? Yes,” Bratton said. “Is it disruptive towards students’ safety and education? No. It’s just not the biggest problem.”