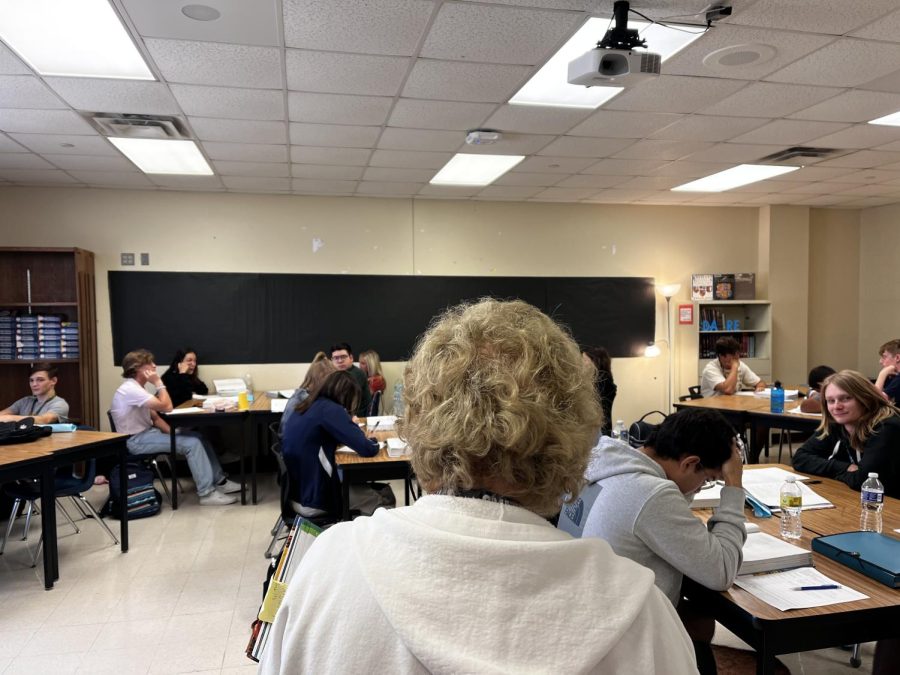 “It’s hard to walk away from a position that I love,” Sladek said. “But it’s necessary for me to do so in order to support my family.”

Sladek, who was entering her fourth year in the classroom, will now be a training specialist for Marathon Petroleum.

“I love to learn myself,” Sladek said. “As teachers, you’re in a profession of growing and supporting others, helping them move onto the next step, yet it’s very hard to grow within your profession, and for me, that’s important.”

Sladek, a single mom, made the decision to leave the classroom as prices rose nationally, and her pay did not. She’s not the only one.

Root of the problem

A survey conducted by the Charles Butt Foundation showed 77% of Texas teachers surveyed seriously considered leaving the profession in 2022, a 19% jump from 2020.

“I don’t think schools in the state do a good enough job to retain teachers,” said Amy Wyer, Faculty Success Coordinator for Texas A&M University. “Retention efforts like fair pay and ensuring their work environment and culture are a positive light are absent in Texas schools.”

Wyer left her role of assistant principal at R.J. Richey Elementary School in Burnet in December.

“I never went into education for the money, but I was approaching retirement age, and I wanted to make sure I had enough quarters with social security so that I could collect it after retirement,” Wyer said. “I would not have been able to collect social security if I had stayed in a leadership role in the public school system.”

Educators across the nation have been fighting for fair pay and liveable wages for decades, and Comal school district is no stranger to that fight. More than 30 Comal teacher job openings have been posted since the first week of school.

“I think teachers are leaving for various reasons,” said Bobbi Supak, Assistant Superiendent of Human Resources and Customer Services, “from personal reasons – staying home to care for a family member to economic reasons – fields outside of education are offering extended pay with bonuses.”

“I think with any employee, we need to be aware of our culture, climate, and work expectations,” Supak said. “The district has a compensation task force that looks at compensation for employees and makes recommendations for future years to the board of trustees based on our budget.”

While the district has begun increasing salaries again, the years of plateaued pay will have a permanent impact on teachers.

Retirement salary for Texas teachers is based on the average of their five highest salaries times 2.3% times their years of service. So, the longer they work, the more money they are able to collect, but sometimes, that’s still not enough.

“If I were eligible for any of the social security that I had already paid into,” Wyer said, “it would have been significantly reduced if I had taken a retirement from the public school system.”

Along with their salary struggles, teachers have been negatively impacted by the COVID-19 pandemic as they now have to find new ways to teach.

“Prior to COVID, I wouldn’t have to put lessons on Google Classroom and be responsible for my classwork,” history teacher Tracy Medina said. “It does have a lot of benefits because if you’re a student and you’ve missed school, you can access your work that same day. But, I don’t think a lot of students and parents realize that it’s two different lessons. It’s a lot of extra work for teachers.”

“There are lots of data points that show elementary students a year after returning from the COVID shut down are, on average, more than a year behind on their reading and math,” Wyer said. “That’s hard for students, and that’s hard for teachers to recover from. When there’s no additional resources to fill that gap, it becomes their responsibility, so it’s an additional stress and burden.”

The Texas Education Agency created a teacher vacancy task force in response to the increase in loss of teachers. They will meet every other month for one year to discuss ways to aid teachers in their careers.

In the meantime, in order to staff more teachers quickly, alternative certification programs, in which uncertified teachers go through an online training program to then be put in the classroom under observation for a year to get certified, have become more common in recent years.

“These programs have really increased across the state,” Supak said, “as some teachers might have had a different profession and are now looking to become teachers.”

However, according to Kelvey Oeser, TEA’s deputy commissioner of educator and system support, teachers who go through alternative certification programs are more likely to leave the profession than those who went to a four-year university.

Wyer attributed that to a need for more support by the school district.

“The school doesn’t do a good enough job with mentoring the new teachers and offering professional development to foster good pedagogy and classroom management,” Wyer said, “because neither of those things come naturally to most people.”

The constant struggle with teacher retention has blurred the lines for the future of Texas education, but, according to Medina, there’s still hope.

“There’s a teacher down the hall who has a degree in economics and now a master’s in education; it’s his second year teaching, and he’s killing it,” she said. “I think for all the noise and news it gets that teachers are leaving the profession, it’s important to remember that this is a profession that we need that people are still joining.”