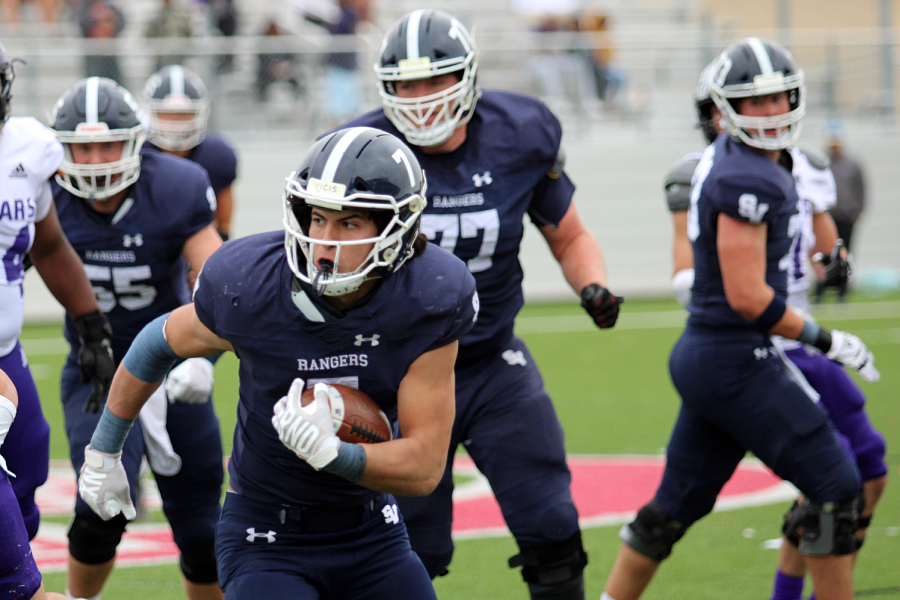 During the quarterfinal game against College Station, senior running back David DeHoyos breaks free on one of his 11 rushes and 54 yards Dec. 3. De Hoyos played offense and defense throughout the season, earning first team all-district honors as a safety.

‘They got the most out of themselves’

Nothing left on the table.

That’s how head coach Larry Hill described his football team’s performance in 2022, which included a quarterfinal appearance for the first time since 2015.

“They got the most out of themselves,” HIll said.

Of course, making the playoffs means the only way to end the season with a win is to claim the state championship. The 2022 team saw its season end with a 21-26 loss to College Station.

“Last Saturday’s game was a classic case of two teams capable of winning it all,” Hill said. “It came down to the very end and one team advanced …. You just recognize that when you’re playing at that level, not much separates advancing from being done.”

The offensive scheme included two quarterbacks at the helm. Starter Chase Senelick stepped in the pocket completing 147 of 216 passes for 2,152 yards and scoring 26 touchdowns with one interception. Senelick’s shoulder injury in the regional semifinal win over Fulshear kept him out of the quartefinal loss against College Station.

When it came to carrying the ball, junior Doug Lantz led with 164 rushes, 682 yards and 8 touchdowns. Senior David De Hoyos rushed 73 times for 392 yards and 6 touchdowns.

Senior T.J. Hunt led all receivers, with 54 receptions, 1,127 yards and 11 touchdowns – an average of 21 yards per catch. Senior Kyler Clarke pulled down 37 receptions and 394 yards and 7 touchdowns.

Offense was not the only side to pull down their share of balls out of the air. De Hoyos grabbed four interceptions with Weston Ross, Jackson Duffey, and Nick Dudzikowski with three each.

The Dec. 3 loss ended in bitter disappointment that not even Hill could erase.

“No magic words or waving of a magic wand is going to ease the hurt or disappointment,” Hill said. “At the same time, the journey is what it’s all about…and the journey was an unbelievable ride.”