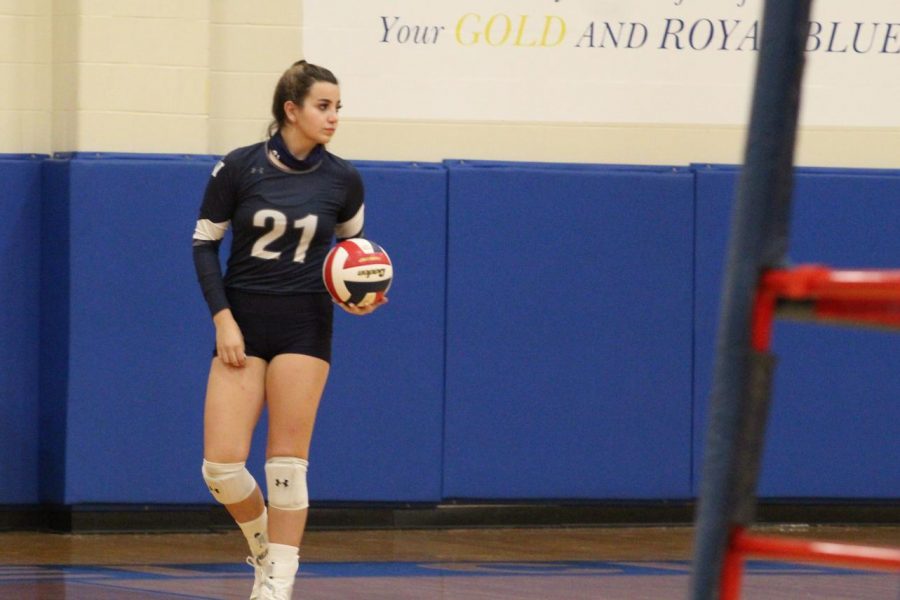 Maddie Dennis gets ready to serve against the Clemens Buffaloes

Off the court: Chapter 2

Maddie Dennis speaks on what it means to be a team

What is a team?

Webster Dictionary describes a team as “a number of persons associated together in work or activity.” However, for junior setter Maddie Dennis, “a team is much more.”

For Dennis, her story started at a young age. She ran track since the second grade and played volleyball since fifth grade. She would continue those sports through middle school until a knee surgery put her track career on hold. It wasn’t until the end of middle school, going into high school, when she turned to volleyball. As a freshman, she was put on the varsity volleyball roster and had to step up her game.

“The pace of the game was a lot more intense, especially cause I was a 14 year old playing with seniors in high school,” Dennis said. With the increase in intensity and the seriousness of each game at the varsity level, Dennis had to mature as a player a lot faster than most. “I had to mature very quickly and it wasn’t the hardest part, but I knew that I would definitely need to mature quicker compared to the other players in my grade,” Dennis said. She was a starter at the varsity level both freshman and sophomore year and saw a huge increase in skill each season.

Her hard work and desire to be at her best would be tested to the max this past summer when, in the midst of the Coronavirus outbreak, Dennis contracted the virus. “I didn’t have it that bad but it did affect me” Dennis said, “it affected my endurance, I couldn’t breath as well, and I lost a lot of muscle because of it.”

However, her love for the game was stronger.

“I knew I had to work a lot harder to get ready, especially with the season being about two weeks away,” Dennis said. “I was running and lifting everyday, as it should be, but I felt like it was much more intense.”

Going into this season Dennis had some different goals then your normal athlete. Unlike most athletes that have a main goal of going to playoffs or winning the big game, she wanted to put her team first.  “Last year I was in a bad place mentally and I felt like I hurt the team and brought them down with me.” However, “this year my goal was to keep a positive attitude on and off the court and not let last year repeat itself,” Dennis said.

She wanted to be more positive on and off the court and all that stemmed from her supportive team last year.

“My team helped me a lot last year. I felt like I just had to accept what was happening in my life at the time and they were a huge help in me doing that. I felt like I didn’t have anyone to go to and I knew I needed to just count on my team to help me get through it and they did because they were there for me. It really meant a lot to me,” She said.

Being a strong leader and a more vocal, supportive teammate has been very visible as the season has gone on. At every game you’ll see a very energetic Dennis, both on the bench and on the floor.

From the outside looking in, you’d think her favorite part of the season would be the wins. However, much like her efforts in becoming a more supportive teammate, Dennis’ favorite part is the bond between the players.

“My favorite part of the season is the bond between the team. We are all best friends and I think this is the closest team we’ve ever had come through the program, we are always there for each other no matter what and I think that’s my favorite part,” she said.

My favorite part of the season is the bond between the team. We are all best friends and I think this is the closest team we’ve ever had come through the program, we are always there for each other no matter what.”

This season, Dennis has tried to incorporate being more aggressive and more vocal on the court. “With college right around the corner and recruiting and all that, it was something I wanted to add to my game,” Dennis said.

Lastly, as the regular season comes to an end and we inch closer to playoffs, Dennis is as ready as ever to be out there, playing the game she loves, with the girls she considers family.